'From the highest point of the road on Scrabster Hill (Caithness), a splendid view is obtained of the mountains of the Reay Country - the name by which the part of Sutherland which belonged to the Mackays is known. To the west the high peaks of the mountains stretching northward to Cape Wrath bound the horizon, and against the evening sky show themselves to the best advantage. To the north there is the Atlantic in its severe majesty . . . . This extensive view may be justly said to be indescribable, as with every changing light and state of the atmosphere it presents an ever varying aspect; but at all times it is impressive in the highest degree and all the more so that the view of both sea and land is so extensive'.Tourists' Guide, 1883, Hew Morrison 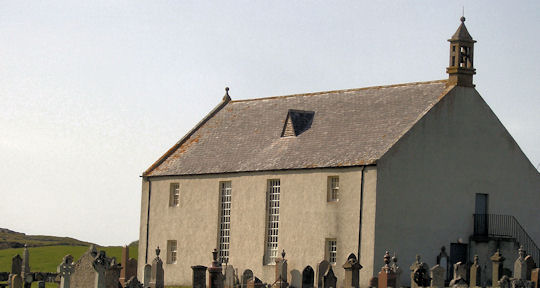 The parish of Farr, as we know it today, is a vast place including Strath Halladale, Melvich, Strathy and numerous fishing hamlets along its north coast plus the old village of Farr, now known as Bettyhill. To the south and west the parish includes Strathnaver and parts of Strathmore.
Please note that many items in this section include people who were at one time termed as living in Reay or Melvich which nowadays generally come under Farr.

The War Memorials at Bettyhill, Strathy, Syre, Strath Halladale & Portskerray & Melvich
Sutherland Families - includes families of Farr - researched by our members
Farr 1809 Militia List
Farr Place Names
Recommended Further Reading & Places to visit
Many of the following books are available at the Strathnaver Museum.
Population Lists of Strathnaver, Strathy and Strath Halladale, 1667-1811, by Malcolm Bangor-Jones, published by the Assynt Press, ISBN 0 9532855 2 9 Very useful booklet for all those researching in Farr - available direct from author
Book of Mackay by Angus Mackay - published 1906 - the link we used to have here has now expired but I have found a copy at the National Library of Scotland which you can read on line HERE.
Tongue & Farr, by Jim A. Johnston, third edition published 1997 by Jim A. Johnston, Bettyhill, Farr - a very useful book for those both visiting the area and those who just want to know more - historical and modern references - I enjoyed this book and learned a lot.
A Memory of Strath Halladale, by Sandra Train, published by Sandra Train, Strath Halladale, Sutherland - available locally, a lovely book on life in a small Highland Community Province of Strathnaver, editor John R. Baldwin, associate editor William P.L. Thomson, Scottish Society for Northern Studies - ISBN 780953226 0 1 - a 'very readable' history. Well worth while.
Tales of the North Coast, by Alan Temperley and the pupils of Farr Secondary School, ISBN 9 780946486189, published by Luath Press Ltd, The Royal Mile, Edinburgh EH1 2ND - a wonderful book of old tales, modern tales - stories gathered in the area between the Kyle of Tongue and Strath Halladale - you will love this if your interests are on the north coast.
The Duke of Sutherland's Memoirs, contains a full list of all those who made a contribution to the Duke's statue in 1834
Ministers & Men of the North - can be read on the internet
Mackay Country - Lovely website with so much to interest those with interests across the north of Sutherland especially those in Farr & Tongue - not to be missed
updated 28/02/2016
Posted by Unknown at 07:18 No comments: